Sleep: How it Affects and Builds Your Brain

How does sleep (or lack of sleep) impact your brain?

Without sleep, we cannot maintain or form the pathways our brain needs to create new memories or learn new things. Sleep is key to multiple brain functions, including how your neurons communicate with one another. Conversely, lack of sleep makes it more difficult to concentrate, response times become slower, and many other issues.

Sleep is key to multiple brain functions, including how your neurons communicate with one another.

What exactly does sleep do for your brain?

Recent research shows that sleep plays a "housekeeping" role. In other words, sleep works to eliminate toxins in your brain that build up while you’re awake. Dr. Timothy Morgenthaler, the co-director of the Center for Sleep Medicine at the Mayo Clinic, said the following: "Sleep is responsible for removing "waste" in the brain that is built up throughout the day. Toxins are metabolic byproducts that gather in the spaces between brain cells, but they are removed during sleep, and cells are restored."

No matter where you are performing, whether in school, on the athletic field, at the office or at home, sleep will help you perform better.

How else does lack of sleep affect your brain?

Lack of Concentration – Concentration and creativity, decision making, and problem-solving are all impaired by too few hours of sleep.

Mood Swings – Irritable, hot-tempered, and emotional, sleep deprivation directly influences your emotional state and can lead to anxiety and depression.

Decision Making – A consistent lack of sleep can cause impaired judgment. Studies show that sleep loss can lead to decreased cognitive performance over an extended period. This, unfortunately, decreases one’s inability to make sound judgments.

Neurological Disorders – Sleep disturbances are common among people with age-related neurological disorders such as Alzheimer’s and Parkinson’s disease.

A Look Into the Anatomy of Sleep

Here’s a breakdown of specific structures in the brain that are involved in sleep. Without sleep, these functions cannot be performed optimally.

Hypothalamus – a peanut-sized structure deep within the brain, contains groups of nerve cells that act as control centers affecting sleep and arousal.

Suprachiasmatic Nucleus – or SCN for short, is located in the hypothalamus, includes clusters of thousands of cells that receive information about light exposure from the eyes, controls the behavioral rhythm.

Brain Stem – located at the base of the brain, communicates with the hypothalamus to maintain transitions between wake and sleep, produces the chemical GABA that acts to lower the activity of arousal centers in the hypothalamus and the brain stem, plays an important role in REM sleep by sending signals to relax muscles essential for body posture and limb movements, keeping us from acting out our dreams.

Thalamus – relays information from the senses to the Cerebral Cortex, active during REM sleep, and sends cortex images, sounds, and other sensations that fill our dreams.

Pineal Gland – located in the brain’s two hemispheres, receives signals from the SCN and increases the production of the hormone melatonin, which helps us relax and fall asleep.

Basal Forebrain – located near the front, bottom of the brain, promotes sleep and wakefulness, while parts of the Midbrain act as an arousal system, Releases adenosine (a chemical by-product of cellular energy consumption) to support sleep drive.

How Much Sleep Do You Need? (click to enlarge) 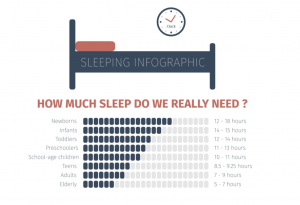 For more information about sleep and your health, check out these posts: